As I mentioned in my last post, one core issue in getting people to maintain healthy behaviours arises from the fact that our biases mean it can be difficult for us to commit to undertake the activities we plan to do. With this in mind, I went to find out more about StickK. Its a great website, created by Yale Uni economists and built on real economics. The concept is that you log in to the website and enter your personal goal or ‘commitment contract’. You can then ‘set the stakes’ whereby you nominate someone to receive a financial amount (i.e. your cash) if you don’t meet your goal.

I had the opportunity to attend a great lecture last night as part of Edinburgh University’s ‘Our Changing World’ lecture series. It was right up my street, looking at Health Economics and Health Behaviours. The presenter, Prof. Michele Belot, did a great job at explaining why we find it difficult to adopt behaviours which are good for us – particularly health behaviours such as taking exercise, eating well and limiting alcohol intake. We learnt why we might want to do these things, but then find it difficult to stick to our plans.

END_OF_DOCUMENT_TOKEN_TO_BE_REPLACED

I have just returned from a great two weeks travelling in Ontario, Canada. A holiday, or any sort of break from normality, often allows us to see things differently and one of the most noticeable differences I left Canada thinking about was the number of strangers I spoke to during my two week trip. Now, I accept that when you are travelling you may have more need to speak to ‘strangers’ – hotel staff for instance – but it was more than just that. It may sound like nothing, but during the first week, two people asked me what the time was. I cannot even remember the last time anyone asked me the time in the UK! I am ashamed to say that the first time it happened, I almost felt like I was about to be tricked somehow. As if I might pull out my phone to get the time, and promptly have it stolen. In reality, the girl really did just want to know what the time was.

I think it is such a shame that in the UK we are losing these random face-to-face interactions.  I’m not sure how we ‘recover’ them although I’m off to go and read more about the role of social and public spaces.

Until just a couple of months ago, I was quite convinced that I could not run. I’ve always enjoyed a variety of sports and played on most of the teams at school, but running was a completely different matter. However, as I mentioned in an earlier blog post I’ve recently been feeling that I needed to increase my exercise levels. I decided to give the NHS’s ‘Couch to 5k’ a try and it has completely changed my views on running and I am now proudly running for 30 minutes three times per week. I recently highlighted a report by the Behavioural Insights Team which explained the key principles for effecting behaviour change. I thought it would be interesting to reflect back on Couch to 5k and see why it has been so successful for me using the Behavioural Insights Team’s principles.

END_OF_DOCUMENT_TOKEN_TO_BE_REPLACED

I read this article with much interest yesterday. It examines the results of a study by Virginia Tech transport scholars Andrea Hamre and Ralph Buehler who were investigating the effects of commuter benefits – free parking, free bus/transit pass etc. It took me a moment to understand the graphs which you can see on the CityLab article, but in summary they show:

So, free parking and free transit do not counter-balance one another. The article rightly points out the problems this causes for cities who are attempting to promote increase use of alternative modes. It also highlights the complexity of incentives and our human responses to them.

If you want to encourage a behaviour, make it Easy, Attractive, Social and Timely (EAST)

Worth a read for a fuller explanation of how to make an initiative easy, attractive, social and timely, plus real world examples.

Apologies for the poor quality of the photo, but it was taken at 10PM last night. The traffic lights you can see were installed just last week. Already they are being well used, but perhaps not for what they are supposed to be used for; last night they made a very good bike stand! 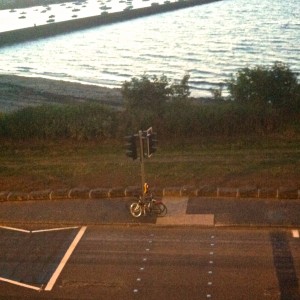 At first I wasn’t best impressed with the people who had decided to leave their bikes attached to the post – blocking both the pavement and crossing. However, I then realised there was a bigger point to this. This particular set of traffic lights is right by Granton Harbour, which is well used by local people especially when the sun is shining as it was yesterday. The area is served by some pretty good footpaths and cycle paths. However, there really aren’t many places for people coming to the Harbour to leave their bikes – demonstrated by the use of the traffic lights as a proxy bike stand. A bike rack wouldn’t cost much and not only would it support cycling but also the use of one North Edinburgh’s fantastic local assets. Edinburgh has some good cycling infrastructure, but perhaps the City needs to get the basics sorted if cycling is to flourish here.

I have been working for myself for just over six months now, whilst awaiting to hear whether the Canadian Immigrations Agency will allow me into the country.  I thought the six-month mark would be a good time to stop and reflect on what being self-employed has meant to my life. If you google ‘impact of becoming self-employed’, you’ll find the vast majority of returns are about financial considerations or regulatory requirements.  Clearly these are important components of what it means to be self-employed but, for me, it is only part of a bigger story.

I started my adventure into the world of self-employment with high-hopes: I would suddenly have plenty of spare time to do things I enjoy; and I would be out and about meeting people, working in unusual locations and being more creative. For various reasons, it hasn’t quite worked out that way!

END_OF_DOCUMENT_TOKEN_TO_BE_REPLACED

I’ve just read a great article on Scientific American about how giving to others can make you happier. I personally do not volunteer much, but I certain know the pleasure I get from making and giving gifts. However, this research has gone a step further to find that having a concrete goal when you are giving will lead to you feeling happier.  So, for example, saying you want to make someone smile (concrete and observable) will make you happier than if you wanted to cheer someone up (abstract). The authors explain why this is the case:

We discovered that framing a goal in concrete terms makes a giver more realistic about their prospects of success. When expectations are too high, it can lead to disappointment and less happiness. But when you frame a goal concretely, you become more focused on how to achieve that goal and can better anticipate the obstacles and opportunities you might encounter along the way.

At the start of the year I embarked on an 8-week mindfulness course (using this book by Williams and Penman). Mindfulness seems to be quite popular at the moment and is becoming widely used in schools as well as in the health sector. If you’ve not heard about mindfulness, I would describe it as learning to be more ‘present’ in the moment which allows you to live a more balanced life.

There was one particular learning towards the end of the programme that has really stuck with me. The idea is to understand what depletes or nourishes you as an individual. This is important because most of us, when we are stressed or anxious, stop doing those things that nourish us, thereby adding to the likelihood that our energy and happiness will rapidly decrease just when we need it. The authors highlighted the fact that we are often motivated to do something and then we go out and do it. However, in certain instances, the motivation is not there and we must go out and do an action before we gain any feeling of motivation.